Public housing residents who want air conditioning need to get approval from the New York City Housing Authority. Residents have to pay to remove the bars from their windows, and pay to get the unit professionally installed. Tenants even have to show the housing authority the receipt.

There’s also a yearly $120 fee for each window unit.

“And then it’s just like an ongoing surcharge, forever,” Tammy said. “‘Cause I tried to find out, ‘Well, how long does this go on?’”

Tammy, her three children and their dad have another air conditioner that the housing authority doesn’t know about it. They didn’t ask for approval and they’re not paying the usage fee, which is why we aren’t using her real name.

“Many people looking at people in public housing think, like, ‘oh these people are trying to get over,” she said. “Maybe they’re just hot and they can’t afford that.”

Earlier this month, WNYC along with AdaptNY news service and ISeeChange.org weather journal launched The Harlem Heat Project to find out how hot it gets in the homes of Harlem residents. The organizations built temperature sensors which, with the help of We-ACT for Environmental Justice, are being placed in Harlem homes with minimal air conditioning to measure heat and humidity around the clock.

It’s still too early to get the full picture, but so far homes are reaching 90 and sometimes 95 degrees Fahrenheit, in terms of the “feels-like” temperature, which combines heat and humidity. And when it gets cooler outside, like at night, we found that it still stays hot inside.

Electricity is included in the rent for public housing tenants, so the air conditioning fee is meant to offset some the extra electricity the machines use.

“The authority absorbs the additional costs of around-the-clock AC use by some tenants,” a housing authority spokesman said. “At the same time, the authority is on the on the brink of financial crisis with $17 billion in unmet capital needs.”

If Tammy gets caught, the housing authority can make her pay retroactively. And they do find out, says Veronica Moss, Tammy’s neighbor, who one recent day was sitting in the courtyard of the public housing complex.

“They come here and they look at your apartment and they count,” said Moss, looking up at the windows. “They count your AC.”

There’s a letter painted under the windows assigned to each apartment line on the ground floor of the building. So if inspectors from the authority look up at the 21-story tower, they can see which apartments have air conditioning and check them against a list of approved units. 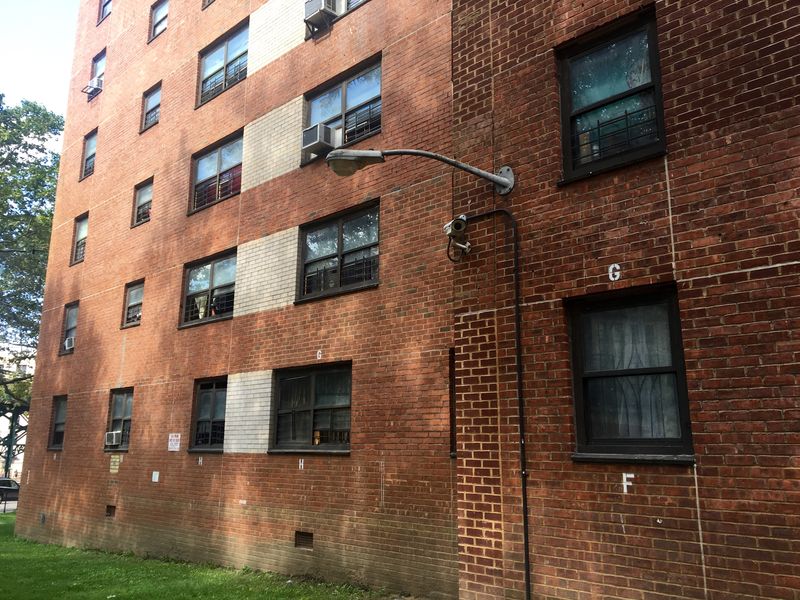 According to the housing authority, illegal AC units can overwhelm the electrical system and cause power outages.

But Prathap Ramamurthy, an assistant professor at the City College of New York who studies urban climates, says there should be a law.

“The housing authority, or the government, built these huge constructions,” he said. And big buildings store heat. “People inside these apartments are exposed to very high heat stress.”

“I live on the 17th floor and you cannot live on that floor without AC in the summer time. It’s just impossible,” Ramamurthy said. “Except that we find people actually do, which is really, really, really bad.”

The Health Department estimates 140 New Yorkers died from excess heat in 2013. That’s the same number of pedestrians in New York who were killed by cars that year.

And deaths are just one measure. About 600 New Yorkers go to the hospital each year for serious heat illnesses, according to the national Centers for Disease Control and Prevention.

Michelle Holmes and her daughter live in a two bedroom on the 6th floor of a massive public housing complex built on the site of the old New York Giants baseball stadium, the Polo Grounds.

They can’t afford air conditioning, and they feel the effects every heat wave.

“Nausea, rapid heartbeat,” Holmes said. “This past week when we had the heat wave we went through those issues. Cramps in our legs. Basically almost passing out in our apartment.”

Holmes is in her 50s and in her third year at City University of New York. She went back to college recently because she wants to start a community advocacy non-profit. She’s on disability. So she bought a fan last summer, and keeps the windows open.

“But it doesn’t cool you down,” she said. “If you stand in front of that fan with water all over your face, it just blew the water off onto the wall.”

The fan is covered in black soot, which is coming in through the open windows. There’s a generator outside of her apartment that’s been supplying electricity to the entire complex since May.

“So in order for us to stay cool we have to breathe this stuff,” she said.