Adam Parris from the Science and Resilience Institute at Jamaica Bay, together with Dr. Brett Branco, giving the fellows an on-site briefing of the current situation in the area.

Editor’s Note: AdaptNY’s Community Editor Sebastian Auyanet recently completed a resilience reporting program that tied together his interests in climate change adaptation with his interests in new ways of conducting journalist. He shares his experience in this report.

A scientist working to help Jamaica Bay to better absorb the next Superstorm Sandy. A retired physical therapist turning empty lots in the Bronx into urban farms. An artist developing a hub where his Red Hook neighbors can gather and learn.

These are a few of the manifestations of the idea of “resilience” I encountered the last week of October, as a member of an inaugural resilience fellowship sponsored by the City University of New York’s Graduate School of Journalism. I joined a group of smart, accomplished journalists from New York, throughout the United States, as well as from nations like the United Kingdom and Liberia, all the goal of better understanding what resilience is and how communities see it.

We visited four of New York’s five boroughs during the week to speak with community organizers, researchers, experts doing work in the field and citizens, all of whom gave us more insight about a concept that still has many definitions and applications.

Basically, resilience is the capacity of a system to bounce back quickly from difficulties or toughness as a result of a major event, whether Sandy-style flooding, heat waves or any other shock.  Resilience is something every community should take into account, but many things define what that might be. Here are a few notions of resilience we heard about during the fellowship:

Resilience is adaptive: When Superstorm Sandy hit New York in 2012, it surfaced flaws in the city’s ability to resist extreme weather events. Whether it was lack of preparedness on the Rockaways coastline or the inability to prevent flooding in Red Hook, it was clear that the city wasn´t prepared to protect all its boroughs.

But different areas of the city need different solutions. And the central question in finding them is: who knows the community best? Is it the local government or the community itself? There’s also the question of who provides what the community ultimately needs, whether that it is the proposed “Big U” barrier around South Manhattan, a floodgate system off the shore of Jamaica Bay or a food hub to address the lack of access to healthy food in the Bronx. The balance of forces at play in that adaptation process is complicated, and even more so when people are trying to devise a solution for impacts whose intensity they can’t fully know. 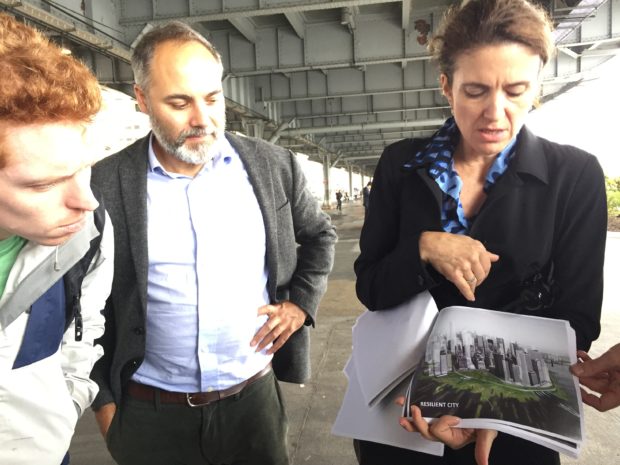 Susannah C. Drake from dlandstudio shows her resilience project proposal for Manhattan, which was also featured at the MOMA Museum last year.

Resilience is multi-functional and de-centralized: In ecological terms, systems become more resilient when their components are more diverse and more versatile.  In thinking about making a neighborhood, town or city more resilient, then, you might ask what are people doing to get there, and how many people can be involved in working towards a solution such as, say, forming a neighbor-to-neighbor network to better help people in need when an extreme heat wave hits the area? Can we get more involved? Can we identify everyone who might potentially be affected? Are we using people´s skills in an effective way? Can they work with minimum coordination to respond?

Resilience means experimenting: A Bronx resident named Karen Washington managed to turn a piece of vacant land in front of her house into a community garden that now works as a place where people can not only plant their own food, but  which also serves as a community hub, with an annual farmers market and entrepreneurship classes for young Bronx neighbors. Dustin Yellin, an accomplished artist in Brooklyn’s Red Hook section, saw his studio, Kidd Yellin, flooded after Sandy. He bounced back with Pioneer Works, a cultural landmark in the form of a community hub, with VR labs, offices, 3D printers available for people, a recording studio and his own work on display. And in Harlem, a group of community organizations, local researchers and news media (including AdaptNY) designed and built do-it-yourself temperature sensors and put them in neighbors’ homes to measure indoor heat levels to protect against indoor heat waves.

Resilience means keeping identity and community:  How do you retrofit an old building full of rent-subsidized tenants to make it more resilient? It’s complicated: Landlords don´t want to assume the cost of retrofitting a building if his tenants are not going to pay for it. Likewise, tenants will not put money in to adapt the place where they live, because it´s not theirs. So important renovations usually must wait for new tenants, who may assume those costs in the form of monthly rent hikes. Usually, this kind of dynamic brings gentrification. And, since the first step in community resilience is for it to be able to stay in place, there can’t really be resilience with gentrification – the challenge of resilience is how to help current dwellers living safely in the community. 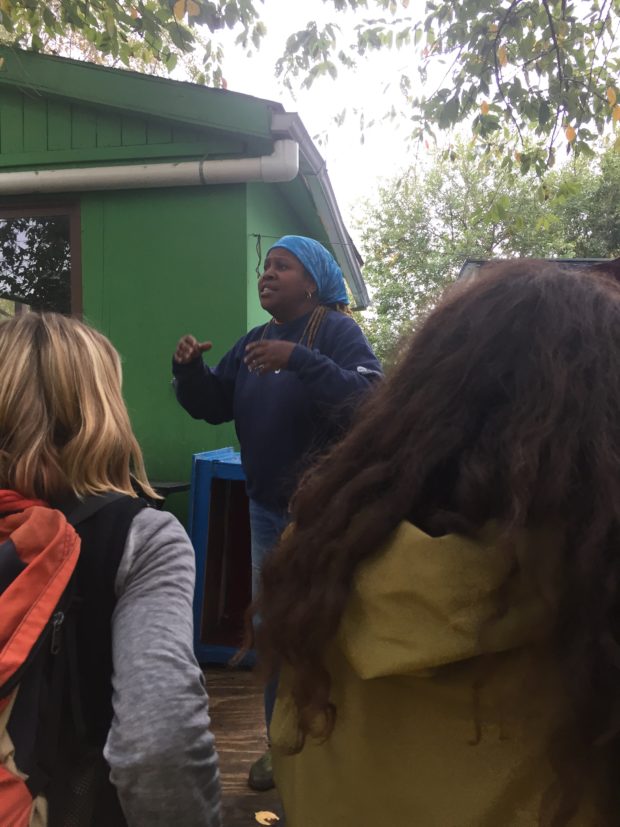 Karen Washington talks to fellows about her community garden in the Bronx.

Resilience doesn´t have to do only with climate change. It also applies to other environmental justice issues, such as environmental racism, which also plays a role in urban development — the profound divisions in Rockaway, easy to detect after doing a tour along the coastline, is a good example of that.

Community issues might benefit from a different kind of journalism

Each one of  these attributes of resilience presents an opportunity for local and community-based news media experimenting in the new field of “social journalism.”

First, social journalism’s orientation toward informing its particular community, rather than general audiences at large,  puts it in a position to offer more tailored coverage and platforms, whether via  Instagram page or printed postcards.

Second, the continuous presence of a social journalist can also help in terms of discovering how you can better inform that community. Which communication channels are best? Which influencers should be reached? Which problems could be solved with the right information? Those are very different questions than those typically asked by a traditional journalist who parachutes into the community just to tell a story.

Finally, a journalist closer to a community can also help to frame better its resiliency issues. Communities will not be able to adapt readily to extreme heat events, for instance, if they don´t know enough about what their risks are. Neither will a community see changes in policy related to its resilience risks issues without seeing those risks framed within policy discussions.

A social journalist could play a significant role in better giving a name to the problems where resilience needs to be applied and to work to help the community to find solutions for it.

Resilience is one of the newest examples of a real, ongoing issue that calls for journalists to apply their skills in totally different ways. While engaging, we can experiment and try a new approach to see if we can contribute in a different way as journalists toward community preparedness and social cohesion.

Sebastián Auyanet is a journalist and editor based in Montevideo, Uruguay. This year, he is a part of the master’s program in social journalism at CUNY’s Graduate School of Journalism that focuses on working with specific communities and develop solutions for them. During his 12-year career, he has worked at various areas of the traditional newsroom, from culture sections to metro desk, and has also been an audience/social media editor for three years.