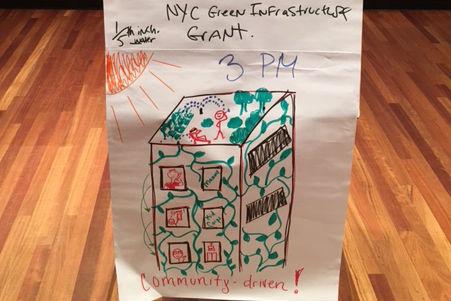 One idea to come out of the Harlem Heat Project workshop was to plant community gardens on the roofs of buildings, and “vertical farms” on the exterior walls. (Photo: Sarah Holder, AdaptNY)

To conclude its three months of research, outreach and storytelling this past summer, the four organizations that pioneered the Harlem Heat Project held a community workshop Oct. 15. Participants in the project, as well as invited experts from the fields of public health, architecture, emergency management and climate change, brainstormed ways to alleviate the risks of extreme heat in cities. Here are their ideas:

Each of these ideas present their own challenges. But several individuals at the workshop, as well as partners in the Harlem Heat Project, expressed interest in wanting to pursue a pilot project based on one or more of the proposals. WNYC will follow the Harlem Heat Project into its next phase and keep you informed about it.